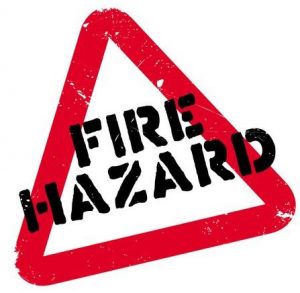 During the winter season people tend to spend a lot of time cooped up indoors. For those who spend eight hours a day (or more) at a workplace, here are some ways to prevent a fire at your workplace during this time of the year…

Keep an Eye on Things

First, if you’re going to prepare hot food where you work, please don’t do it on a hot plate on your desk. You should not be using a portable burner in the hallway, either. Basically, almost all buildings have designated spaces set aside for food preparation, and those are the areas where you should heat up your food. Otherwise, you’re begging for a fire. Furthermore, don’t leave food unattended when it’s in a stove, on a burner, or even in the microwave. Fires can start when things are left unattended, but a watchful eye can catch problems before they spiral out of control and the fire department needs to get involved.

Be Careful of Space Heaters

Next, as much as you want to use space heaters in your building, don’t. These appliances can be used properly, but oftentimes they’re not. What if the space heater is too close to flammable objects or materials? What if a breeze or air from a nearby vent blows paperwork on the heater and those papers start on fire? Meanwhile, what if the space heater is on but nobody’s even in the room? That’s just a recipe for fire disaster.

Also, if you’ve got people who smoke, have them do it outside rather than within a commercial building. So many times the report comes back from a fire incident as “a cigarette” being the culprit for the fire. Even if people don’t want to go outside in the winter to smoke “because it’s too cold,” make them. You don’t want a smoker “accidentally” burning down your building because of their carelessness.

Finally, have you checked how you are using extension cords and power strips? There is such a thing as “overloaded,” whereas you’ve got too many things plugged in to one cord, one strip and/or one outlet. Don’t overdo it, because too much stuff on one thing can cause a build-up of heat and potential fires. Furthermore, check to see that cords/wires aren’t frayed or damaged. If so, get and use new ones.