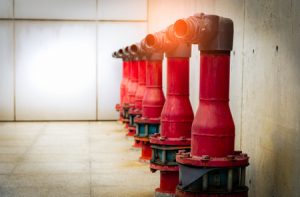 If you own a chemical plant, a power plant, an aircraft hangar, or another type of building that contains extremely flammable materials, you should consider installing a fire deluge system as opposed to a traditional fire suppression system. These types of systems rely on dry piping that is unpressurized as well as open sprinkler heads, and there are many advantages to using them in high hazard areas. Learn about some of the advantages of using them below.

They put out fires faster than traditional systems.

Since fire deluge systems are able to get to work quicker than traditional systems, they’re also able to put out fires in a much shorter amount of time. As soon as they sense a fire inside of a facility, they’ll almost instantly dump more than enough water on it to put it out. This will prevent a fire from spreading within a facility and stop it from coming into contact with anything that could cause the fire to grow out of control.

There is no chance of them freezing when they’re exposed to the cold.

The pipes in traditional fire suppression systems are always filled with water. This can lead to issues if those pipes are ever exposed to cold temperatures. They could even burst if the temperature drops down low enough. In fire deluge systems, the pipes are dry, which eliminates the chances of you being forced to deal with frozen pipes. It’ll be one less thing you have to worry about when operating a facility that contains flammable materials.

Interested in discovering if a fire deluge system might be right for your facility? R.G. Fire Company can tell you more about pre-action and deluge systems. Call us at 330-456-8848 today to get additional information on them.